BETRAYAL OF THE PLANET OF THE APES! 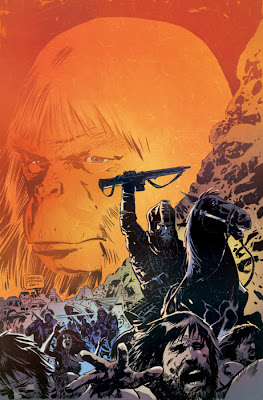 I'm very excited to announce Corinna Bechko and I are writing and I'm drawing BETRAYAL OF THE PLANET OF THE APES, a 4 issue miniseries from BOOM! Studios. The first issue hits stores in November.


If you follow me on Twitter or have ever talked to me in person, you probably know how big a fan I am of PotA. So getting the chance to co-write and draw this book is a huge thrill for me.


Our story is set just before the original Charlton Heston film in the classic Apes continuity. Yes, that means I get to draw Dr. Zaius! But the story stands alone. You don't need to know anything about Planet of the Apes to enjoy it. If you want to read a sci-fi political thriller with plenty action and adventure then you should check out this book.


I'm having an amazing time working on this project. I'm lucky to have Jordie Bellaire as my colorist as well as variant covers by Tonci Zonjic, Declan Shalvey and Mitch Gerads.


If you'd like to read more, here's an interview with me and Corinna about BETRAYAL:


It's solicited in this month's Previews so ask you comics retailer to order you a copy.


Apes!
Posted by Gabriel Hardman at 11:56 AM No comments:

THE LIAR in Double Feature 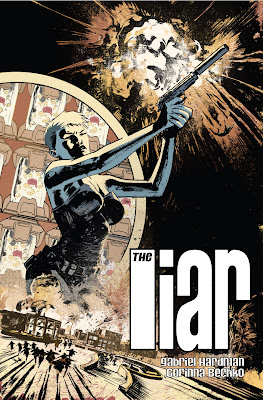 THE LIAR is a creator owned Action/Sci-fi/Espionage short story co-written by me and Corinna Bechko. Obviously, it's drawn by me as well.

Vera Brant is a liar. In other words, she’s a spy. She specializes in freelance assignments that skirt the edges of what governments and corporations can do on their own.
When she’s called in to investigate a mysterious explosion that killed the head of a multinational company she finds more than she bargained for. Not only is a high-level
Russian Mafioso involved, but more attacks are planned unless Vera can stop them.
Also, lots of stuff explodes!
It'll be released Wednesday August 10th in Double Feature:Action #2. Double Feature is an innovative comics app from Four Star Studios that presents two brand new stories by top creators in every issue for just 99¢. The issues are loaded with extras including commentary and behind the scenes process work. You can read more about the app with a link to download it here:

I'm normally very reticent to show my creative process out of context but this app is all about context. You can see my pencils, inks and colors all on separate layers or simply read and enjoy the story. It's a stand alone story so you're not on the hook for anything. But we'd love to do much more with this character. 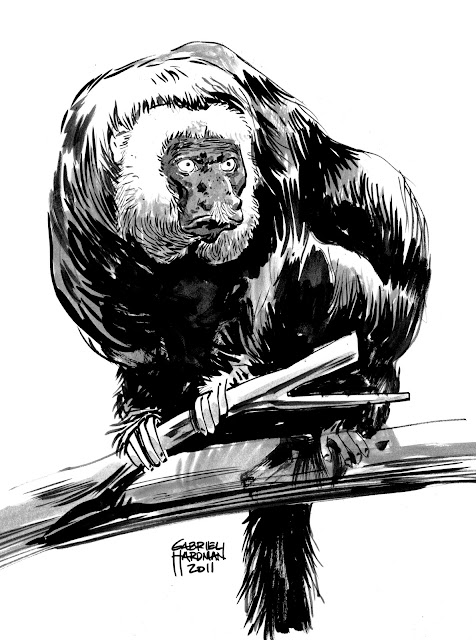 This sour looking guy is a Saki Monkey.


The sketch is my contribution to Ben Towle's weekly Twitter project: the Animal Alphabet (hashtag #AnimalAlphabet)
Posted by Gabriel Hardman at 10:07 PM No comments: 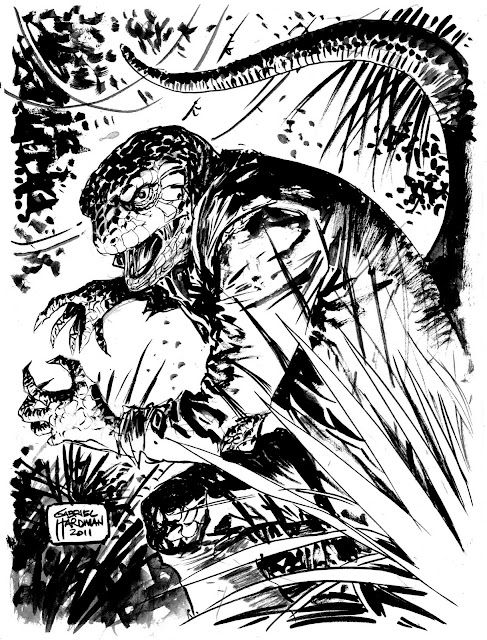 Via Netflix Instant I recently watched several episodes of the 1967 Spider-Man animated series that I fondly remember from syndication in the late seventies. The episode that had the most impact on five year old me detailed Peter Parker's trip to the Florida Everglades to cover the story of an alleged Lizard Man who turns out to be sympathetic, one armed scientist Dr. Curt Connors. I my mind this episode was a thrilling mix of terror and pathos. Did it hold up on rewatching? Um...no. It was terrible. I have no idea what the appeal was for my younger self. But it does speak to a kid's ability to fill in meaning where there isn't any.


Well, I didn't let watching the show dissuade me. I put all those childhood feelings of fear and pity into the above Lizard sketch!


Recent interpretations of the character have skewed toward a grim and gritty dinosaur like approach. I chose to go back to the Steve Ditko design with a bit more grounding and atmosphere.

Unfortunately, I have to cancel my appearance at this year's Baltimore Comic Con. Work commitments have made it impossible for me to fit the con into my schedule. Corinna and I will miss catching up with our friends and meeting fans.

I'll do everything I can to make sure I'm at Baltimore Comic Con 2012.

We will definitely be at New York Comic Con in October. Hopefully east coast people will find us there in Artist Alley.

Thanks!
Posted by Gabriel Hardman at 1:30 PM No comments: