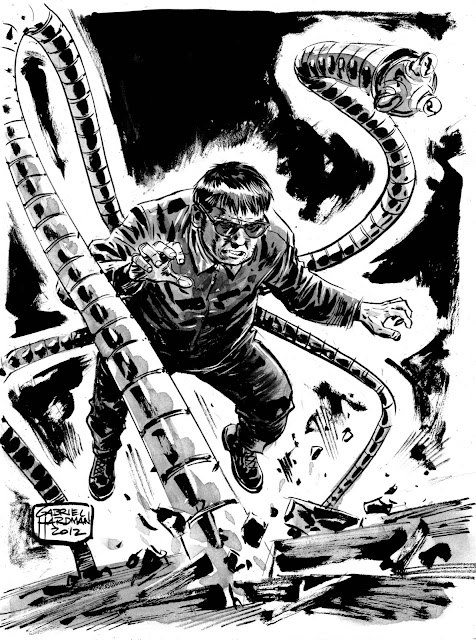 Comic-Con in San Diego starts this week. I'm only going to be at the show on Friday but I've somehow scheduled virtually every possible moment of it:

What is the current state of Star Wars comics? Join Dark Horse editor Randy Stradley and Star Wars creators Carlos D'Anda, Corinna Bechko, Gabriel Hardman, Doug Wheatley, Gabe Eltaeb, Tom Taylor, Zack Giallongo, and others for the lowdown on what's up, what's coming up, and why you should be reading!
Friday July 19, 2013 10:00am - 11:00am Room 7AB

Corinna Bechko and I will be signing our book Star Wars: Legacy and more at the Dark Horse Comics booth.

FOUR COLORS OF FEAR: HORROR IN COMICS PAST AND PRESENT

Throughout comics' storied history, horror has been an important part of the medium. In 2012 Dark Horse released its most ambitious horror publishing slate to date. Now, Dark Horse unveils a whole slate of new titles guaranteed to have you running for the covers! Join Dark Horse horror line editor Scott Allie, along with Eric Powell (The Goon), Tim Seeley(Hack/Slash/Ex Sanguine), Paul Tobin (Colder), Gabriel Hardman and Corinna Bechko(Station to Station), and others, for an exciting look at this year's most promising thrills and chills!
Friday July 19, 2013 3:00pm - 4:00pm
Room 23ABC

Illustrators and storyboard artists use their skills and imaginations to develop the transcendent visuals of the big screen, be it adventures on distant worlds or life in earthly hovels. ModeratorTim Burgard (White House Down, Rise of the Planet of the Apes) talks to illustrators Donna Cline (Bones), Gabriel Hardman (Inception), Patrick Rodriguez (Pirates of the Caribbean: On Stranger Tides), and Peter Rubin (Man of Steel).
Friday July 19, 2013 4:30pm - 5:30pm
Room 24ABC