Finale! BETRAYAL OF THE PLANET OF THE APES #4 ships today! 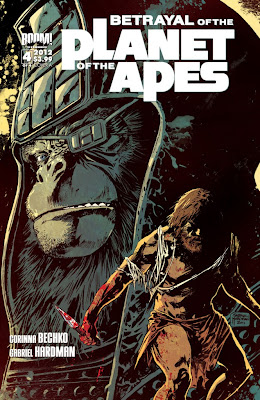 Finale! BETRAYAL OF THE PLANET OF THE APES #4 ships today, 2/1! Don't forget to pick it up from your local comics retailer. Co-writing and drawing this series has been a great ride and the single most satisfy experience I've had in comics. I truly can't wait for the next project that Corinna and I will be writing and I'll  be drawing. Hopefully we'll be able to announce our next creator owned project soon.

You can find a preview of issue 4 here.

But even after Betrayal, we're not done with Apes. We are busily writing EXILE ON THE PLANET OF THE APES which Marc Laming is drawing. Exile continues the action and intrigue in our corner of the Apes universe, leading up to the events of the first PLANET OF THE APES film. And much like Betrayal, Exile will stand alone as a story so don't be afraid to jump onboard. Marc is doing a fantastic job and I can't wait for everyone to check out his pages.

If you missed it in issues be sure to pick up the BETRAYAL OF THE PLANET OF THE APES trade paperback in July. Ask your comic shop to order it for you from May's Previews or you can even preorder from Amazon here.

In non-Apes news, Secret Avengers #22 will ship next week on 2/8. It's my first issue as artist. Rick Remender is writing. You should check it out!

I'll be doing an in-store signing with Rick next Wednesday at Beach Ball Comics in Anaheim, CA. The signing starts at 5PM. I'll be doing quick free sketches as well. The store is located at 3024-G W Ball Rd Anaheim, CA 92804


On March  4th Corinna and I will be appearing at The Los Angeles Comic Book and Science Fiction Convention at the Shrine. I'll be drawing commissioned sketches there all day. More info on the Shrine show here:  http://www.comicbookscifi.com/

Other conventions this year will include Emerald City Comic Con in Seattle, C2E2 in Chicago, Summit City Comic Con in Fort Wayne, Indiana and more. In the near future I'll post in more details about my entire con schedule.
Thanks for the support!
Posted by Gabriel Hardman at 10:35 PM 3 comments:

BETRAYAL OF THE PLANET OF THE APES #3 ships this week! 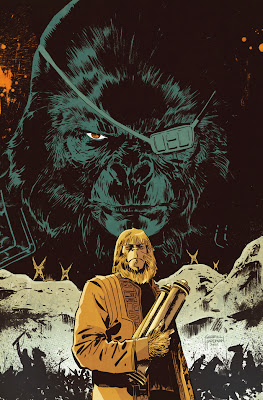 BETRAYAL OF THE PLANET OF THE APES #3, the penultimate chapter of our first APES miniseries ships this Wednesday, January 4th!

Thanks to everyone who has supported and enjoyed this book. I couldn't be happier with the response!
Posted by Gabriel Hardman at 3:59 PM 2 comments: